By Joanne Moore on July 21, 2018 in Celebrity Horoscopes Blog, Uncategorised 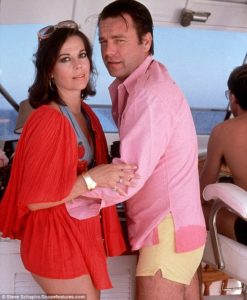 Here is a quick look at the horoscopes of husband and wife movie stars Natalie Wood and Robert Wagner. It would have been Natalie’s 80th birthday today (July 20, 2018) if she hadn’t drowned in mysterious and dubious circumstances in 1981 when she was on a weekend boating trip with Wagner (and her Brainstorm co-star Christopher Walken). The official coroner’s finding was “death by drowning and other undetermined factors.”

Natalie Wood was born with the Sun, Mars and Pluto forming a powerful conjunction in Cancer and was emotional, intense, passionate and sexy. This close conjunction also played out in her life via her attraction to powerful and hypersexual men (like Elvis Presley, Dennis Hopper and Warren Beatty). But she was also drawn to possessive and possibly violent men … like Robert Wagner.

Robert Wagner was born on February 10, 1930 and has a Sun/Venus conjunction in Aquarius. So he was very handsome and can be incredibly charming. But he also has a dark and dangerous Plutonic side. With Scorpio Rising, plus the Moon (conjunct his ruler Pluto in Cancer in the 8th house) opposite Saturn and square Uranus. This forms a very close cardinal T-square, with Uranus at the apex – which is a very volatile and unpredictable combination. So, beneath the smiling and polished persona, Wagner could be a jealous and angry control-freak. With plenty of Plutonic obsessions and Scorpio secrets.

Wagner’s Pluto (17 Cancer) is exactly square Natalie’s Saturn (17 Aries, conjunct her Descendant) which is a very controlling and karmic placement. They were first married in 1957 and then divorced in 1962. But Saturn/Pluto ties are extemely difficult to escape from, so they re-married in 1972 . His Mars (2 Aquarius) is also closely conjunct her Black Moon Lilith (3 Aquarius) which is another volatile (and possibly violent) connection. Plus Christopher Walken’s Pluto is directly opposite at 4 Leo. So he was the fiery molotov cocktail that was thrown into this already troubled and explosive relationship!

Natalie Wood died after a boozy and angry argument with her husband. Which was fueled by his jealousy over the close relationship between Natalie and her co-star Christopher Walken. So what was happening in the heavens that night? On 29 November 1981, transiting Pluto was at late 25 degrees Libra (square Natalie’s Sun/Mars/Pluto conjunction). And transiting Saturn was at 18 Libra (opposite Natale’s Saturn and square Wagner’s Pluto). So these heavy transits triggered their compulsive and ultimately tragic Saturn/Pluto karmic ties.

In March and December 2018, transiting Saturn hits 8 degrees Capricorn, which is exactly conjunct Wagner’s natal Saturn (and triggers his Moon/Saturn/Uranus t-square). In February 2018, police named Wagner (who is now 88) as the only ‘person of interest’ in the case. And a new podcast (Fatal Voyage – which investigates what really happened on that fateful night) is about to hit the digital airwaves. So perhaps Natalie is calling from the grave; karma is catching up with Robert Wagner; and his chickens are finally coming home to roost?