The astrologer behind Boho Astro

“Joanne Madeline Moore’s horoscope columns are syndicated on five continents and she runs a successful astrology website.” The Huffington Post 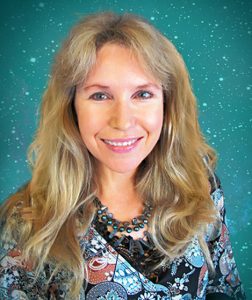 Born with Uranus on the Midheaven and Jupiter rising, Joanne Madeline Moore spent her teenage years working as an actress in Australian film, television and theatre. She was then bitten by the travel bug and decamped to foreign shores where she studied macrobiotics and shiatsu in London; meditated at Stonehenge; explored the medinas of Marrakech; lived with gypsy poets in the caves above Granada (in Spain); and was blessed by a Balian priest during a lunar eclipse at Kalibukbuk (in Indonesia). But the astrology muse kept calling …

Joanne has been a professional astrologer and writer since 1996. She has a BA degree in Journalism and Creative Writing (from Deakin University) and a Diploma in Education (from La Trobe University). She studied Applied Astrology, Greek Mythology and Jungian Psychology (at Astro*Synthesis) and has a Practitioner’s Certificate (from the Federation of Australian Astrologers).

“Joanne Madeline Moore is one of the world’s best-known Sun sign columnists and the creator of the amazing website Boho Astro.”  Astrologer Jessica Adams

Her book ‘Love and Sex Signs’ was originally published by Simon and Schuster, and is now available as an eBook. Joanne’s daily, weekly and yearly horoscopes have been published in over 60 newspapers and magazines (and on websites) in the USA, Canada, the United Kingdom, Japan, India, Malaysia, Indonesia, Australia, New Zealand, South Africa and the South Pacific. (Sales and syndication are handled by her agent Auspac Media.)

“Boho Astro is one of the most charismatic horoscope sites I have seen. Joanne’s smooth, easy-to-read horoscopes are indicative of an astrologer adept at writing for the mass media.” Top100Horoscopes.com

“Joanne Madeline Moore writes wonderful horoscopes. Always accurate and well-written. You should check them out. Her astrology advice is second to none!” AstrologyAnswers.com

“International media astrologer Joanne Madeline Moore is respected in her field and praised by her peers.” The Canberra Times