By Joanne Moore on November 22, 2022 in Celebrity Horoscopes Blog, Uncategorised 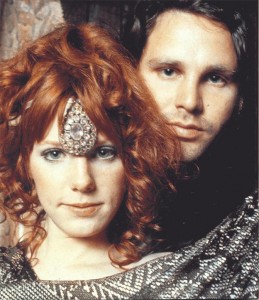 Singer, songwriter and poet Jim Morrison was born on December 8, 1943 with the Sun and Mercury in the philosophical and freedom-loving sign of Sagittarius.  So many of his songs and quotes were about freedom … from oppression, from the past, from society’s expectations, and from each person’s inner jailer.

Bohemian individuals always have Aquarius and/or Uranus feature strongly in their birth chart. And Jim Morrison had an Aquarius Ascendant and Mars conjunct Uranus, which highlighted his rebellious side; his attraction to danger; plus his compulsion to push the boundaries and take risks. It also made him the perfect conduit for the Aquarian 1960s, when freedom and experimentation were seen as the way to a utopian new world.

Jim Morrison [also known as The Lizard King] is seen here with his girlfriend Pamela Courson who [with all that fiery red hair] had her Moon, Mercury and MC in Sagittarius.

“Expose yourself to your deepest fear. After that, fear has no power, and the fear of freedom shrinks and vanishes. You are free.”   [Jim Morrison]

“I’m interested in anything about revolt, disorder and chaos. It seems to me to be the road towards freedom.” [Jim Morrison]

“A friend is someone who gives you total freedom to be yourself.” [Jim Morrison]