By Joanne Moore on February 22, 2021 in Celebrity Horoscopes Blog, Uncategorised 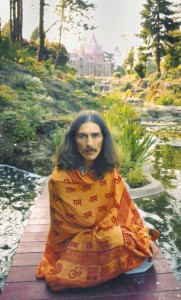 Singer, songwriter, musician, movie producer and gardener George Harrison was born on February 25, 1943 with his Sun and Venus in the artistic and gentle sign of Pisces.

Bohemian individuals always have Aquarius and/or Uranus feature strongly in their birth chart. And George had his Mercury in Aquarius; plus Uranus square his Sun, sextile his Venus, and trine his Neptune. So he was a creative combination of sensitive and spiritual Pisces; mixed with artistic, adventurous and altruistic Aquarian flair. And he was also a boho-hippie fashion trendsetter.

George was instrumental in introducing Indian music, mysticism and meditation to Western pop culture in the 1960’s. And he was the first person to organize a celebrity benefit concert, gathering his famous friends together to donate their talents for ‘The Concert for Bangladesh’ in 1971. This became the template for benefit concerts in the future like Bob Geldof’s Band Aid in 1984.

He had a very down-to-earth side too. With his Mars in earthy Capricorn, he was a passionate and accomplished gardener. In the 1970’s he took on the mammoth tasks of designing, restoring and re-planting the 36-acre garden at the English manor house, Friar Park [shown above]. He derived great pleasure in growing plants from seed and planting them himself saying “I’m just a gardener basically.”

Rock & roll legend Lou Reed was born in Brooklyn, New York on March 2, 1942. And was there ever a more musically bohemian astrological amalgam? Sun in poetic, enigmatic Pisces; Mercury and Venus in avant-garde Aquarius; Mars in musical Taurus, closely conjunct Uranus [a wilfully rebellious combination]. He was the ultimate Piscean Transformer.

How I loved that album … I played it so many times … on so many perfect days. It took a suburban Australian teenager for a wild walk through the dark, seamy and seductive underbelly of Reed’s New York. He weaved magic with words and music as he transported his spellbound audience to another time and another place. Singer, songwriter and musician, he revolutionised music in the 60s; was godfather of punk in the 70s; experimented with copious amounts of drugs and alcohol; released over 30 albums; was a gifted photographer; a devoted husband [to fellow unorthodox icon, Laurie Anderson] and dedicated student of Tai Chi for more than 20 years.

Lou Reed was the punk poet who lived his life in an uncompromisingly creative way, and [like the name of his band Velvet Underground] he had within him the quintessential Piscean ability to be two extremes at the one time.