By Joanne Moore on June 24, 2022 in Celebrity Horoscopes Blog, Uncategorised 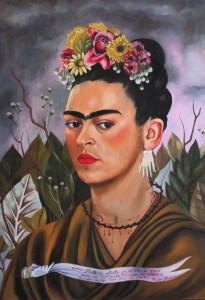 Surrealist painter Frida Kahlo was born in Mexico on July 6, 1907. She is best known for her dramatic self-portraits, which incorporate symbolic portrayals of her physical, psychological and emotional wounds. Her private life was tumultuous and included a tragic accident when she was 18, that led to 32 operations and left her unable to have children. Plus two volatile marriages to the philandering Mexican muralist Diego Rivera, which led her to pursue affairs with people including Russian revolutionary Leon Trotsky, sculptor Isamu Noguchi, dancer Josephine Baker and actress Paulette Goddard.

Frida had Sun in creative Cancer and Moon in earthy Taurus and she loved to paint, cook and garden. She also had a flamboyant Leo Ascendant and every day she wore colorful traditional dress and jewelry with flowers in her hair, as if she was preparing for a fiesta.

Bohemian individuals always have Aquarius and/or Uranus feature strongly in their birth chart and Frida had her Sun opposite Uranus [a rebellious nature]; Mars conjunct Uranus in the 5th house [a fiery and unpredictable love life] plus Aquarius on her Descendant [an unconventional marriage]. Since her death at age 47, her paintings have been celebrated internationally and she has also become a feminist icon.

“You deserve a lover who listens when you sing and respects your freedom …a lover who takes away the lies and brings you hope, coffee and poetry.” (Frida Kahlo)

“At the end of the day, we can endure much more than we think we can.” (Frida Kahlo)

“I don’t paint dreams or nightmares. I paint my own reality.” (Frida Kahlo)

American artist and sculptor Alexander Calder was most famous for inventing the mobile. He was born on July 22, 1898 when the Sun was in the last degree of Cancer, which gave him a great love of home, family and children.  With his Moon and Venus in Virgo he had an earthy, practical side and, with his Mars was in Gemini, he was extremely versatile.

His creative output included paintings, sculptures, mobiles, stage sets, lithographs, toys, tapestries and jewellery, plus he also designed carpets. Bohemian individuals always have Aquarius and/or Uranus feature strongly in their birth chart and Alexander Calder had Uranus trine his Sun [a brilliant innovator] square his Mercury [a highly original mind] and opposite his Mars [a restless risk taker].