By Joanne Moore on February 22, 2019 in Celebrity Horoscopes Blog, Uncategorised 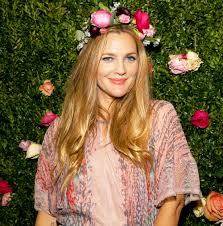 Boho Pisces Drew Barrymore was born on February 22, 1975 with Sun, Venus and Jupiter in the creative, emotional and impressionable sign of Pisces. And she has Moon in Cancer (another water sign) which increases her emotional sensitivity. The combination of Pisces and Cancer also makes her an incurable romantic, and she has been married three times. She explains “I love romance. I’m a sucker for it. I love it so much. It’s pathetic.”

Pisces is also the sign associated with alcohol and drugs, and Drew had substance abuse problems in her teens and had two stints in rehab. (She wrote about her turbulent childhood and teenage years in her autobiography ‘Little Girl Lost’.) Fortunately Drew has Mars in earthy and practical Capricorn, which helped her be disciplined enough to kick drugs and focus on re-building her acting career. It also gives her a sound business brain, and she now has additional careers as a successful director, producer and businesswoman. (Her film production company is called ‘Flower Films’, she’s written four books, and has her own line of fragrance.)

Boho Pisces Drew Barrymore: Avant-garde individuals always have Aquarius and/or Uranus feature strongly in their birth chart. And Drew has Mercury in Aquarius and Uranus closely trine her Sun. So she is an innovative thinker and has a bohemian way of expressing herself …

“A few years ago, I bought an old red bicycle with the words ‘Free Spirit’ written across its side. Which is exactly what I felt like when I rode it down the street in a hippie tie-dyed dress.”

Movie star Elizabeth Taylor was born on February 27, 1932 with the Sun, Mercury and Mars all in the creative, glamorous and magnetic sign of Pisces. And she was certainly one of the most luminous and spell-binding actresses of all time. Her Piscean side was also expressed through her empathy and kindness, her support of numerous charities, and her active involvement with the American Foundation for AIDS Research (which she co-founded in 1985).

But she also has a passionately feisty side – represented by Moon in Scorpio, Venus in Aries and Jupiter in Leo. Her Venus was also conjunct Uranus in her marriage house – hence her tumultuous love life and long list of eight weddings and divorces (which included being married to Richard Burton twice). She was gutsy, blunt, adventurous, swore like a trooper, and proudly declared “There are so many doors to be opened, and I’m not afraid to look behind them.”