By Joanne Moore on April 20, 2022 in Celebrity Horoscopes Blog, Uncategorised 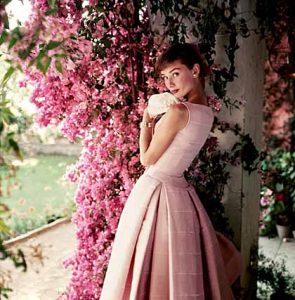 Film star, fashion icon and humanitarian Audrey Hepburn was born on May 4, 1929 with the Sun and Jupiter in the practical and hard-working sign of Taurus. Audrey starred in 27 films and won an Academy Award but she was no precious, pampered movie star!

Taurus is an earth sign, and Audrey had decidedly earthy interests – including animals, cooking and gardening. She created a beautiful garden at her home in Switzerland, and in 1992 she hosted the acclaimed BBC television series Gardens of the World. She described her bucolic life in the Swiss countryside.

“I love our little town. I love going to the open market twice a week with all the fruit and vegetables and flowers … I have a delightful rose garden, an orchard and jellies to preserve.” So Taurean!

Plus, with Moon in compassionate Pisces and Mars in nurturing Cancer, Audrey also had a strong humanitarian side. She spent the last years of her life working with children as a Goodwill Ambassador for UNICEF in some of the poorest communities in Africa, South America and Asia.

“As you grow older, you will discover that you have two hands. One for helping yourself, the other for helping others.”

“I love being by myself, love being outdoors. I love taking a long walk with my dogs and looking at the trees, the flowers and the sky.”

[All quotes from Audrey Hepburn]

Actress and photographer Jessica Lange was born on April 20, 1949 with the Sun in sensual Taurus plus Moon and Jupiter in unconventional Aquarius. She spent her early 20s studying mime in Paris, and then went on to become one of Hollywood’s top actresses with award-winning roles in movies like Frances and Tootsie. She also had tempestuous relationships with many fabulously bohemian men: Spanish photographer Paco Grande; American film director Bob Fosse; Russian ballet dancer Mikhail Baryshnikov; and actor/playwright Sam Shepard.

With her Mars in daring Aries, she is passionate and adventurous and lives life at a fast pace. She reflects “From seventeen until I had my first child [at 32], I lived like a madwoman. I really burnt out my cylinders. There is nothing I feel I’ve missed. I lived everywhere and, believe me, did everything. I have gone down the highway of life full tilt.” Spoken like a true bohemian wild child!