By Joanne Moore on February 19, 2022 in Celebrity Horoscopes Blog, Uncategorised 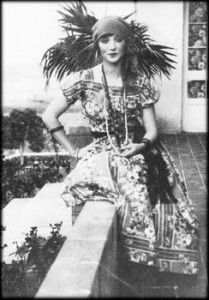 She was also an extreme example of the lengths a triple Piscean will go to for love, as her strong Piscean need to blur boundaries between reality and illusion ended up overtaking her life. ‘To live life as a dream’ was her motto, which resulted in her spending over 20 years as a bi-coastal bigamist, with an older husband in New York and a younger one in California [neither knew about the other]. Pisces is a dual sign, symbolized by two fish swimming in opposite directions, and she referred to her simultaneous marriages as her ‘bi-coastal trapeze’.

Bohemian individuals always have Aquarius and/or Uranus feature strongly in their birth chart and Anais Nin had Venus opposite Uranus, which accounts for her avant-garde attitude to love, life and creativity. Anais and her California husband [Rupert Pole] were both very involved in the design, construction and decoration of their beautiful home at Silver Lake in Los Angeles. [Rupert had his Sun, Mercury and Uranus all in Aquarius, plus his Venus was also in Pisces.] So the house was a collaboration between two people who were strongly Aquarian and Piscean. The architecture was very Aquarian … modern, original and open plan; while the decore was predominantly Piscean … soft pastel colours, with plenty of paintings and water features.

Piscean poet, novelist and gardener Vita Sackville-West was born in England on March 9, 1892. She was a member of the bohemian Bloomsbury group, and designed the world-famous garden at her home Sissinghurst. Bohemian individuals always have Aquarius and/or Uranus feature strongly in their birth chart and Vita had her Moon square Uranus, and her Venus opposite Uranus. So it’s no surprise that she had a very unconventional love life [especially for the times she lived in]. She had many love affairs throughout her 49 year marriage [including one with writer Virginia Woolf].

Vita’s son Nigel described his mother’s attitude to love and marriage. “She fought for the right to love, men and women, rejecting the conventions that marriage demands exclusive love, and that women should love only men, and men only women.”